Through the hard work of parents and educators, a renewed push for bilingual programs is changing the educational landscape of schools, communities, and cities around the world. Over the last two decades, the general approach to education has gradually shifted away from the mastery of one language to the goal of bilingualism, language enrichment, and the preservation of heritages and cultures. This new approach has pushed linguistic communities to create dual-language programs that have embraced these new goals. For the last 30 years, I have been supporting the development of language education in schools around the world. Through my research, as well as my professional and personal experiences, I have found that children who have had a bilingual upbringing enjoy numerous benefits beyond the acquisition of another language, including a better appreciation of other cultures, other individuals, and even themselves. Here is why I believe we should establish language as a critical life skill, through developing and implementing bilingual education programs, promoting diversity, reducing inequality, and helping to provide quality education. 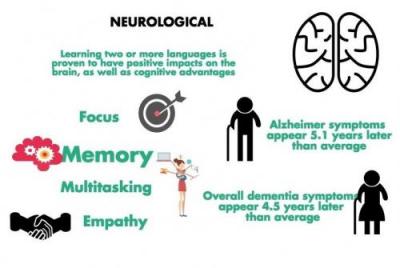 Bilingualism as an experience has a profound and clear impact on the structure and organization of the brain. Bilinguals benefit from lifelong advantages in problem solving thanks to the constant rewiring of their executive control system. Bilinguals’ constant need to process information in two languages activates the executive control system more intensely and more efficiently. Moreover, learning to speak two languages from childhood also pays off in old age. Elderly bilinguals perform problem-solving tasks with high success, without utilizing certain areas of the brain particularly vulnerable to aging. 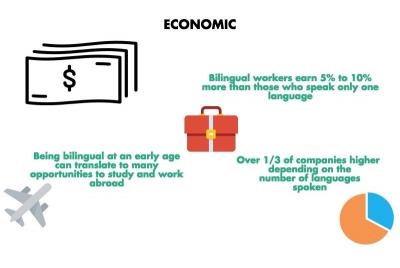 Being bilingual at a young age can lead to many more opportunities to study and work abroad. Companies that employ bilingual people benefit materially with translation and interpretation services, facilitating communication with a larger clientele. In addition to the obvious assets of cultural and linguistic competencies, bilingual candidates are often preferred in the workforce as they have the ability to quickly adapt to new environments. These cutting-edge advantages can lead, subsequently, to higher salaries and more comprehensive access to the global job market. 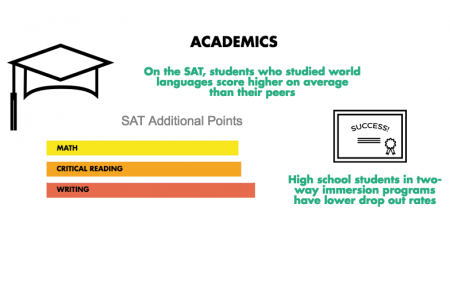 Dual-language learning is the only method of second language acquisition that facilitates the full closure of the achievement gap between non-native and native speakers in primary and secondary schools. Furthermore, bilingual students outperform their monolingual peers on standardized tests—concrete evidence of the success of dual-language programs. Well-structured and well-implemented dual-language instruction across all subjects of the curriculum afford all students the opportunity to develop a deep academic proficiency in both languages, and in other subjects.

Being bilingual can help improve a child’s ability to learn, focus, communicate, and understand the world. Bilinguals can communicate with far more people around the globe and, as a result, have access to far more literary, academic, and artistic works, as well as professional and social networks, than monolinguals. Bilinguals also learn other languages more easily than their monolingual peers because after mastering a second language, individuals are able to call upon the strategies they employed to acquire a third or fourth language. Finally, bilingualism fosters an attitude of multiculturalism and open-mindedness. Bilingualism opens doors to a wide range of cultures and communities that would have remained otherwise closed off to a monolingual person. Instead of having one linguistic “home” or comfort zone, bilinguals have many. As one might expect, a multilingual life is extraordinarily rich, diverse, and full of possibilities. As geographical barriers continue to dissolve in this era of globalization, borders no longer restrain the spread of ideas and cultures throughout the world. The complex identity of the bilingual is more relevant today than it has ever been, and will continue to play an increasingly important role in the future. 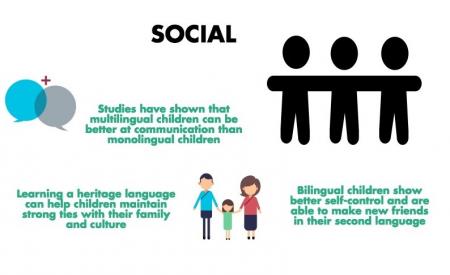 Author: Dr. Fabrice Jaumont is a scholar-practitioner, award-winning author, non-profit leader, and education advisor based in New York. He currently serves as Education Attaché for the Embassy of France to the United States, a Research Fellow at Fondation Maison des Sciences de l’Homme in Paris, and an adjunct professor at New York University and Baruch College – The City University of New York. He is President of the Center for the Advancement of Languages, Education, and Communities, a nonprofit publishing organization with a focus on multilingualism, cross-cultural understanding, and the empowerment of linguistic communities. His recent book, The Bilingual Revolution, has been translated in a dozen languages and provides inspirational vignettes and practical advice for parents and educators who want to create a dual-language program in their own school. The book is published in Arabic by Austin Macauley. Jaumont’s new book, Conversations on Bilingualism, discusses the cognitive, emotional, and social advantages of being bilingual, biliterate, and multicultural.

Did you enjoy this article?

Now entering its 14th year, the world class GESS brand is going from strength to strength, all shows within the portfolio give your company the platform to network, research and increase revenues and meet key decision makers in the education sector.